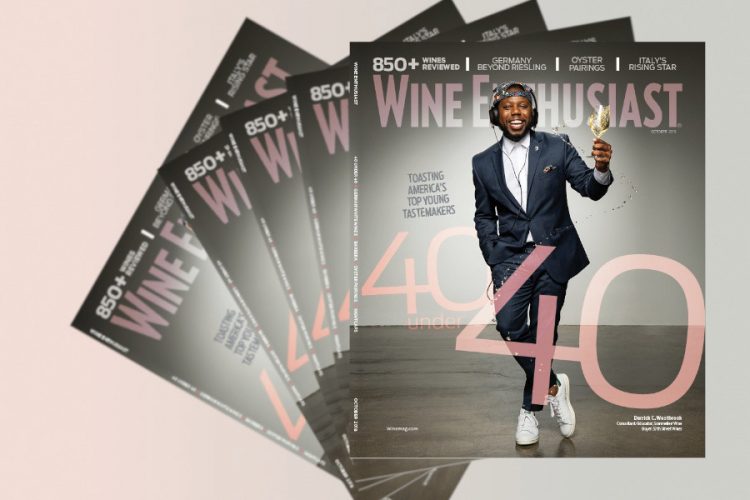 A rising, nationally recognized star on the U.S. fine wine scene, Derrick Westbrook is one of the most exciting wine professionals of his generation.

Last year, Wine Enthusiast not only included Derrick Westbrook in its coveted list of 40-under-40 top wine personalities in America but it also featured him on the cover of the 40-under-40 issue — one of the wine industries highest honors.

Here’s what their editors had to say about Derrick:
“Westbrook got his start in the wine industry as a bright-eyed server for the former, family owned restaurant, Lovoy’s in Birmingham, AL. He later served as Cellar Manager for the famed Alinea-group restaurant, NEXT and became the Beverage Director of the Michelin-starred, Elizabeth Restaurant all before turning 30. Today, Westbrook manages 57th Street Wines, an independent wine shop, located in Hyde Park, Chicago, and owns and operates Derrick C. Westbrook, a company that hosts pop-up wine-tastings, dinners and develops beverage programs for some of the city’s best restaurants and bars. Westbrook also serves as a consultant for Bibliophile Gastropub in Hyde Park.”

What do you like about Barbera d’Asti as opposed to other top Italian grape varieties?
I like that the style is approachable even in its youth while having great aging ability. Moreover, I love it as a great talking point when referring to the conversation about grapes versus regions.

Are your clients familiar with Barbera d’Asti?
Our customers aren’t super familiar with the style. But I do enjoy introducing new people to the wine and they are almost always instantly in love.

What’s your advice to Barbera d’Asti producers on how to reach American sommeliers and consumers?
I think producers have to maintain their typicity of style and use “not traditonal” marketing techniques such as experiential marketing to get people to connect to the wine.