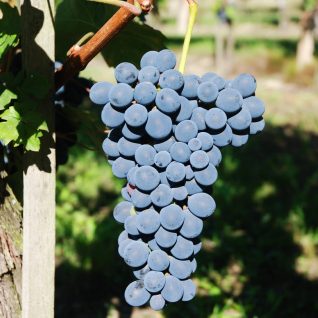 Although there are reasons to assume that Barbera has been grown in the area ever since the Middle Ages, the first historical reference to it dates back to 1512, the year when a cadastral document of the Municipality of Chieri reports its presence.

The varietal immediately spread throughout the area, soon becoming the wine that farmers would keep for home consumption and thus contributing to the creation of a habit of daily consumption which has become synonymous with the identity of Barbera.

Following its quick circulation to all the Monferrato and the provinces of Asti and Alessandria, it started to be listed among Piedmontese grape varieties, thanks to its inclusion in Count Nuvolone’s 1798 ampelography handbook. In those years, it conquered the nearby cities and villages and, after the opening of the railway line, it reached the port of Genoa and, thus, many international markets.

After a long period during which its consumption had consolidated in the surrounding area, Barbera d’Asti took a further step from the 1980s on, when a group of producers put their best efforts into enhancing its overall quality through better vineyard and cellar management of the product.

This is the most widespread red grape variety cultivated In Piedmont. Barbera is also a variety of importance outside our Region, in areas such as Oltrepò Pavese, Colli Piacentini, Franciacorta, Umbria, Campania and Sicily; it is also present on the other side of the Atlantic, in California and South America for example.

The leaf is average in size, pentagon shaped with five lobes, with a dark green upper blade, flat or slightly cupped, and a finely bullate texture.

The ripe bunch is average in size, pyramid shaped with short wings or a winged cylinder shape, quite compact; the light green pedicel is medium to long. The berry is blue-black and medium-sized.

Budbreak: Medium-early (first half of April).

APTITUDE FOR CULTIVATION AND USE

A grape variety of normal vigor, with considerably high fertility and constant production. It copes well with various training and pruning techniques, the most common being the espalier system with Guyot pruning, leaving just one fruit cane; it adapts well to short pruning.

Barbera is quite resistant to downy mildew but is susceptible to mold and acid rot of the bunch. Its berries, which have high levels of fixed acidity and anthocyanins, are used to make a wide range of wines, ranging from young, sometimes semi-sparkling reds to important wines that are meant for aging.